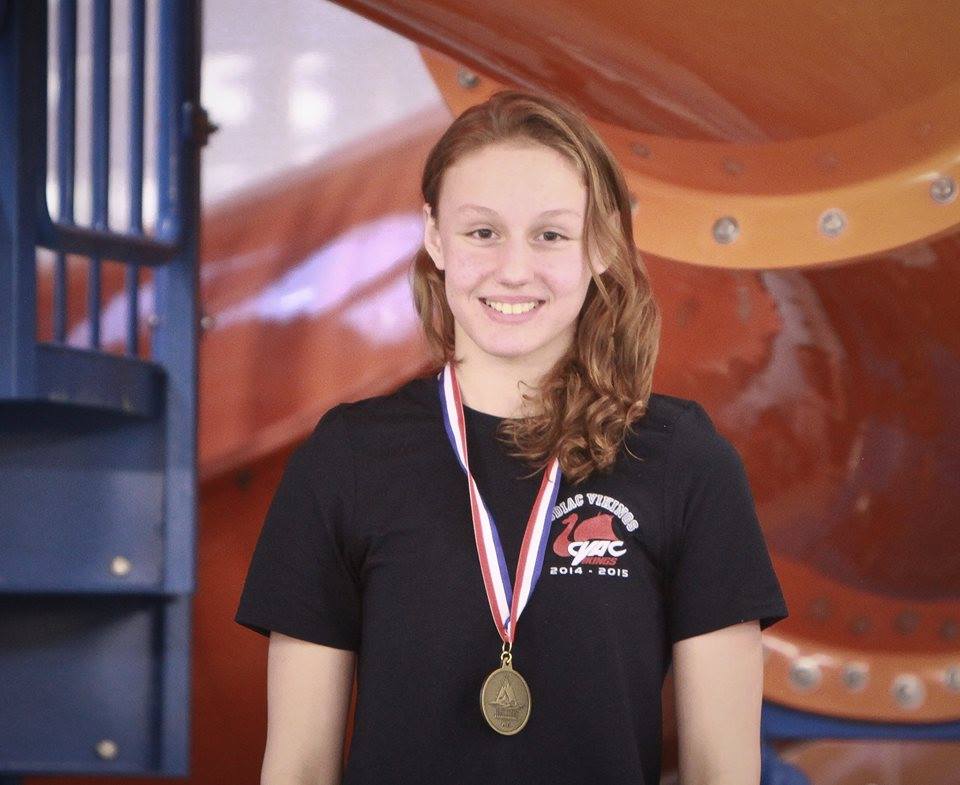 I have had the pleasure of working with Brooklyn Douthwright since my short time with the Codiac Vikings Aquatic Club.  She has been a joy to watch as she strives to improve her technique with dedication and hard work.  She thrives on the harder sets and strives to keep ahead of the pack yet she maintains good swim etiquette and sportsmanship in and out of the pool.

At 11 years old Brooklyn has ended the short course season by being 1st place in every race she swam except for two 2nd place finishes, she broke 12 Club records (not including breaking her own records over again), six New Brunswick Age Group SC Records, is ranked 1st in Canada in many events for 11 years old, ranked in the top ten for all age groups in New Brunswick for seven events and obtained her Age Group National qualifying SC times for the same.

My highlight for Brooklyn this season was the 400 free provincial record she swam at East Coast Championships in Newfoundland which was amazing to watch and I think the best race of the meet.  The race ended with Brooklyn and Madison Archer from NS both breaking long standing provincial records. When I watched Shyanne Shannon set the record 28 years ago, when I coached with TIDE, I thought that nobody was ever going to break it but Brooklyn surprized everyone including me in the finals!  We are both very eager for her to swim in races like that again in the future!

I think it needs to be mentioned that Brooklyn has managed to achieve all of the above while also training and competing at the national levels as a competitive synchronized swimmer.  Not only has she shown strong performance in her racing but her dedication and commitment to competitive swimming and training are very admirable – she has perfect attendance except for being away for various competitions.  In addition to the above Brooklyn plans to start training in open water because she plans to swim from New Brunswick to Prince Edward Island at the end of summer at which time she will be 12 years old.

It is for the above reasons that I would like to nominate Brooklyn Douthwright as Swimmer of the Month – her real passion for swimming certainly deserves this recognition.

Thank you and congratulation Brooklyn for all your personal accomplishments and for being such a positive role model for our Team.  You make coaching fun. I look forward to coaching you during the Long Course Season and at Age Group Nationals this summer as well as helping you to prepare for Open Water Swimming.