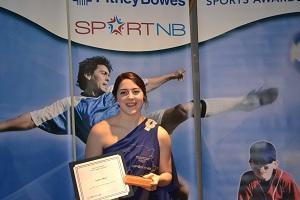 Lauren Adam of the Fredericton Aquanauts Swim Team was awarded the Spirit of Sport Award at the 2012 Pitney Bowes Sports Awards on Saturday November 17 in Fredericton.

Also nominated for awards were:

These  awards are presented every year to New Brunswick Athletes at the Pitney Bowes Sports award banquet.

Swimming New Brunswick would like to encourages all provincial swim clubs to consider nominating their athletes for these awards.