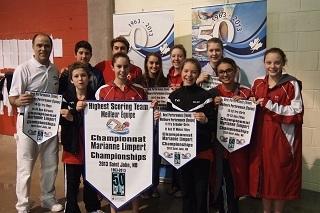 Over 300 Swimmers attended the three day event. A highlight for many swimmers was the presence of the team champs namesake Marianne Limpert at the opening ceremonies.

Thank you to Meet Manager, Gary Losier, meet organizers, volunteer officials who made this meet such a success.

Also thank-you to Team Aquatic Supplies for attending this event!

April Swimmer of the month
Scroll to top